Menaka Archiv Forschung „Khurshedbanoo“- a woman lost in the archives 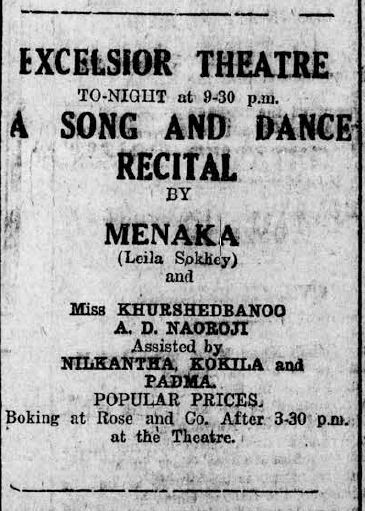 „Khurshedbanoo“- a woman lost in the archives

Menaka’s first performance in March 1928 in Bombay was a collaborative effort of choreographers, dancers and musicians. Among the latter was Khurshedben Naoroji. Although she belonged to a prominent political family, she barely left any traces in the archives.

Menaka started her dance training with ballet dancer Harcourt Algeranoff most probably in the summer of 1927. [1] Subsequently, there was a second period of learning, choreographing and rehearsals. Algeranoff writes about this second collaboration- which would have been at the end of May 1928: Leila Sokhey was in London again and came for more lessons. I was surprised and pleased to learn that she had given a successful concert in Bombay when she was there. She had studied so short a time it seemed incredible.[2] 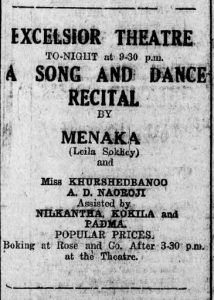 The Bombay Chronicle of March 24, 1928 carried an announcement of Menaka´s recital. Besides Menaka, the advertisement names three assistants: Kokila, Padma and Nilkantha. From a copied and scanned photograph of poor quality in  a digitized number of´The Modern Review´ of June 1928, it seems Nilkantha was the stage name of Khalil Dedashti  – who also joined Menaka on her European tour in 1930-1932. [3]

The reviewer of the Bombay Chronicle highly praised the recital of the „young enlightened men and women who had courageously undertaken the pioneering enterprise.“ [4] The description of the music in the review suggests Mani Patel arranged several music compositions for the recital, whereas singer „Miss Naoroji“ performed as a soloist.

Named ‘Khurshedbanoo’ in the newspaper advertisement, but also known as Khorshed and Khurshedben A. D. Naoroji (1894 -1966?), she was the granddaughter of early nationalist leader Dadabhai Naoroji (1825-1917). Historian Dinyar Patel painstakingly combed through a multitude of primary source materials to shed light on her life course. According to Patel, Khurshedben moved to Paris in her early twenties to study European classical music. Trained as a soprano, she attempted to notate traditional Indian music that had been transmitted in an oral tradition. Upon her return to Bombay in 1925, she was intent on opening an academy for Indian music. [5]

Dance scholars writing on Uday Shankar have highlighted mobility and cultural hybridity as crucial factors in the work of the dance pioneer. Shankar was introduced to the Indian arts through European mentors, whose views were based on translations of „Oriental’“ sources by British scholars. Consequently, Shankar’s dances were shaped by these influences. [6] Likewise, Menaka received a British formal education, her dance training began with Harcourt Essex (Algeranoff was his Russian stage name): a Briton in Pavlova’s international dance company, which was based on the Russian ballet tradition.

In the case of Khurshedben, „an American in Greece played an unintentional but instrumental role in forging a Parsi Indian woman’s nationalist convictions.” [7] Eva Palmer – Sikelianos, an American aristocrat, had studied Greek musical traditions for over twenty years and was recognized as a prominent member of the movement to revive classical Greek traditions and culture. She taught Khurshedben Byzantine musical notation – which she then successfully deployed to notate Indian music. According to Patel, Khursedben’s sense of national identity was enlivened during her stay in Greece. In “Mother Greece”, as she referred to the country, she recognized “a sort of essence” of Bharat Mata, or “Mother India.” [8]

The performance of May 1928, might have formed a watershed in the life of both Menaka and Khushedben. Menaka would resume her creative endeavour with Algeranoff and perform with him, and Pavlova in the audience, in December 1928. Khurshedben, on the other hand, visited the Sabarmati Ashram of Gandhi in Ahmedabad somewhere in the second half of 1928. That seems to have been the starting point for a life dedicated to anti-colonial nationalist activities. She trained women in non-violent resistance at the ashram, and reached out to women in the North-West Frontier Province; a conservative region plagued by banditry. She held the stern conviction that Gandhian non-violent resistance would allow for the “great awakening of women”. [9]

This seems somewhat difficult to reconcile with the archives that are silent on Khurshedben. Letters of her family members offer a handful of insights about her formative years, and in the few letters of Palmer-Sikelianos Khushedben’s voice emerges. Patel carefully weaved together snippets from different sources to construct Khurshedben’s biography, yet he only partly succeeded. He ascribes this to a lack of female agency within the archive. The historian states there are hardly any archival collections on Indian female leaders. Hence, most biographers have concentrated on Indian men, whose archives barely refer to their female counterparts. He writes: “In a country where the papers of so many prominent men are missing or disintegrating into moth-eaten heaps, it should be of little surprise to us that the written records of significant women leaders have long ago turned to dust.” [10]