Menaka Archiv Forschung E. Narayan Das in the archive of music and gesture 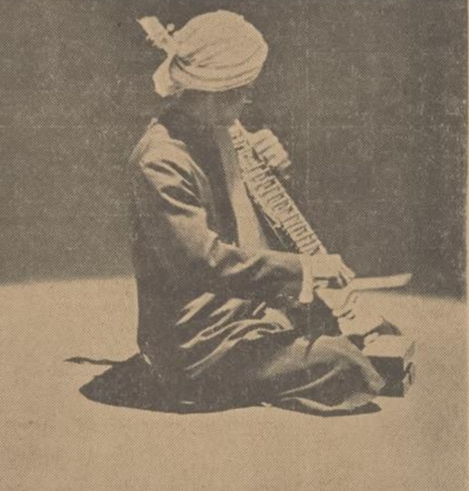 When Menaka started her first  European tour in Paris 1930, she was accompanied by dancer Nilkantha and singer Bina Addy. In the Netherlands, she performed on live music from a small orchestra, led by Boris Dobrovolsky. Besides, the advertisements for her performances in The Hague and Amsterdam announced  a “soloist on sitar en dilruba”. [1]

On the grainy scans of digitized newspapers, E. Narayan Das is pictured with his face turned away from the camera. Four Dutch reviewers briefly mentioned the musician; he provided musical interludes on sitar and dilruba and gave a demonstration on the tabla between the dances of Menaka and Nilkanta. [2]

Although descriptions of Menaka’s recitals included which raga was used for every dance composition, there is no explanation of Das’s repertoire. From announcements in Swiss and French newspapers it becomes clear he joined the dancers for performances in September in Geneva and Lausanne [3] and again in Paris, in December of 1931. [4]

The music of E. Narayan Das was recorded during the Colonial Exhibition in Paris ( 6 May – November 15, 1931.) The Musée de la Parole et du Geste (“Museum of speech and gesture”) of the University of Paris and the Institut de phonétique (“Institute for phonetics”) made 346 recordings of inhabitants of European colonies present at the exhibition. [5] Among them were people who were put on display [6], as well as soldiers from  French and Portuguese West- African colonies, Northern Africa and French Indochina who worked on the exhibition grounds. Contrary, Narayan Das was one of the professional artists who was recorded. Other representatives of the so-called high arts were, for example, the performers of the Balinese theatre from the Dutch Indies, players of the Vietnamese monochord and an orchestra from Laos. [7]

The archives of the Museum of speech and gesture, kept and digitized by the French National Library, contain thirteen discs with recordings of the Indian musician. Each side of a disc contains a recording of a raga (the fundamental unit of composition) played by Narayan Das, all the musical fragments being roughly three minutes in duration. Besides 24 ragas, on one disc he demonstrates five different talas, or rhythmic patterns, on the tabla. [8]

In October 1931, the “museum of speech and gesture” made 157 photographs of the artists. The intention was to capture individual musicians or ensembles and gestures they made while singing, and photograph the instruments and the hands of the musicians while they played them. [9] In the album, five photographs show Narayan Das playing sitar and tabla. Two photographs show his hands executing different strokes on the tabla. [10] 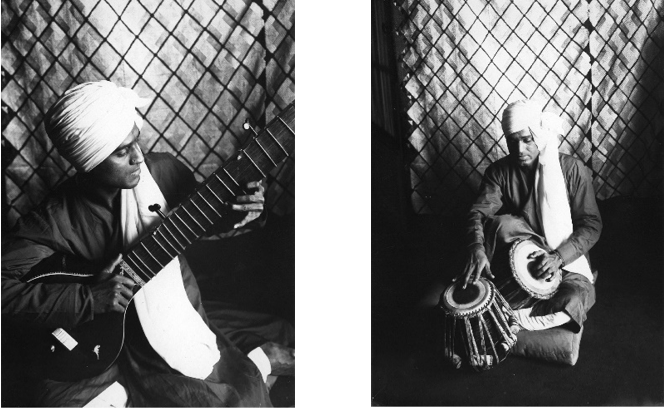 The audio recordings were made for the general public but were a commercial failure as a result of poor distribution and the absence of interested music listeners. On the other hand, the effort of the Museum of speech and gesture and the Institute for phonetics was an important development in French ethnomusicology, as classical, traditional and popular songs and music from all over the world could be recorded on French soil. [11]
Nevertheless, thus far no sources have been found that shed light on E. Narayan Das’s training, his career as a musician or the duration of his stay in Europe. Since the written sources are largely silent on E. Narayan Das’ contribution to Menaka’s tour, the audio recordings in the French national archives allow us to get an impression of the sounds he shared with his European audiences.

„Khurshedbanoo“- a woman lost in the archives