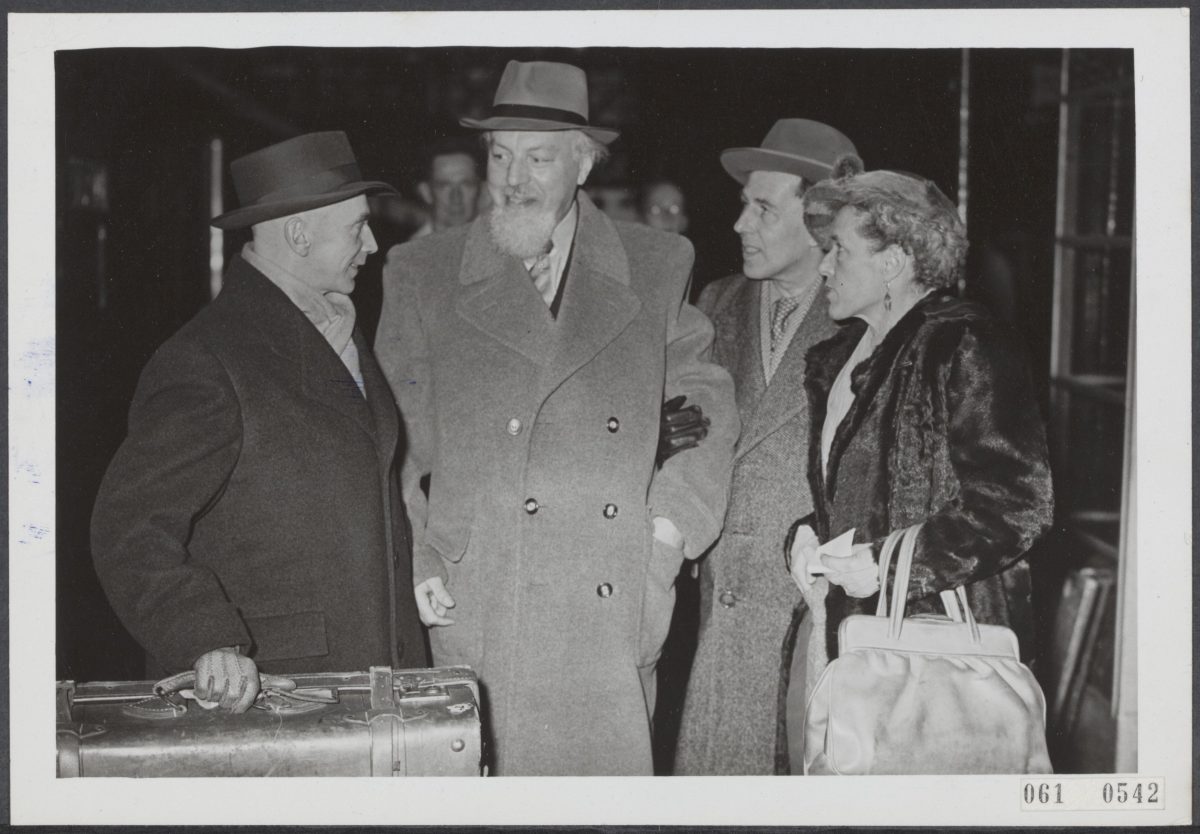 “A highly successful bit of propaganda.” Performances of Harald Kreutzberg

Before, during and after the Second World War, Ernst Krauss acted as the impresario of Harald Kreutzberg – the „dancing ambassador of National Socialist Germany.“

When the Dutch capital Amsterdam hosted the Olympic Games in 1928, Ernst Krauss was involved in arranging cultural performances to celebrate the international sports event. Amongst others, he contracted the Wiener Operetta for a performance of Wiener Blut in the Stadsschouwburg, with a ballet group to dance the Viennese Waltz. [1] Krauss’ focus however was one dance, since it was ‘most related’ to the Olympiad. [2] As part of the celebrations, the impresario invited dance partners Yvonne Georgi (1903-1975) and Harald Kreutzberg (1902-1968) for the first time to the Netherlands.
Kreutzberg had trained under the founders of Ausdruckstanz or expressionist dance, Rudolf von Laban and Mary Wigman, and Georgi was a former student of the latter. At the time they enjoyed immense appeal, touring in Europe as well as the United States until 1931. [3] Ten years later, in December 1938, Krauss planned a solo tour in the Netherlands for Kreutzberg. During the intervening years, the dance career of the male soloist had become closely intertwined with the National Socialist leadership. 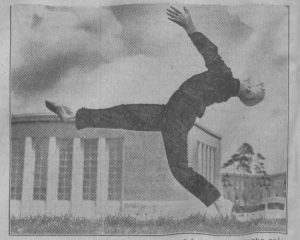 Harald Kreutzberg rehearsing a dance he would perform during the ceremony on the opening evening of the Olympic Games in Berlin, Nieuwe Schiedamsche Courant (July 8, 1936).

The Deutsche Tanzfestspiele (German Dance festival) (9 – 16 December 1934) were conceived by the Reichsministerium für Volksaufklärung und Propaganda (Ministry for the People’s Enlightenment and Propaganda) to showcase national socialist ideology and aesthetics. Kreutzberg received a prominent place on the opening day of the festival; the audiences frequently burst into applause during his solos and critics highly praised the dancer for evoking the “great and whole” sentiments of nationalist mythology. [4]
The Tanzfestspiele were the prelude to the Olympic Games of 1936. At the ceremony on the opening night, Kreutzberg contributed with a choreography and a solo dance. For Mary Wigman he had choreographed a sequence where sixty soldiers met their sacrificial death, part of her dance Heldenkamp und Totenklage (Heroic struggle and death lament). [5] For his own solo he presented Sword Dance (or Weapon Dance), which ended with the dancer’s heroic death by the sword. [6]

In September 1937 he was the main dancer at the German Art Week during the Paris International Exhibition [7] and in July 1939 he appeared at the Tag der Deutschen Kunst (Day of German Art) in München. [8]
In ‘Hitler’s dancers’ Marion Kant detailed how members of the German dance community ingratiated themselves with the Nazis. She included a documentary appendix with primary sources. One letter consisted of a report of Kreutzberg’s performance in 1939 by a representative of the Reich German Community in The Netherlands. It was sent to the Direction of the Foreign Organization of the NSDAP to the Ministry for Propaganda. The letter merits a longer quote:

Amsterdam, 14 december 1939.
“Report on the Gala Dance Evening of Harald Kreutzberg in Amsterdam”
[…] Especially noteworthy was the fact that among the floral tributes presented to
Kreutzberg the one bearing the sash of the Colony with the swastika was prominently
displayed. This exceptionally discrete but emphatic emphasis on the German character
of the evening was well received by those who attended (with the exception of
the many Jews). A highly successful bit of propaganda. […] […], this performance was culturally and propagandistically
considered, since it involved an entirely different public, a full success.
A limited number of free tickets were made available to me, which I gave to section
leaders. In addition, members of the German Colony could purchase tickets at a
reduced price, a concession granted by Herr Krause, by showing their red Colony
identification card. Many members of the Colony took advantage of the concession
and this led to the very satisfactory attendance at the event.” […] [9]

Although Kant transliterated ‘Her Krause” from the original handwritten letter, it seems likely the commission was granted by impresario Ernst Krauss. “Due to the overwhelming success” of the shows in 1939, Krauss announced a second tour of Kreutzberg in February 1940. [10] 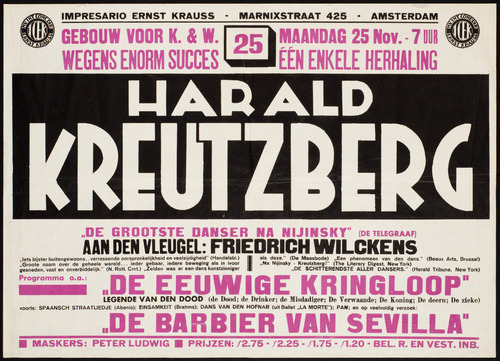 According to Guilbert, Kreutzberg reached the pinnacle of his career during the Second World War. His foreign travels followed the cycle of alliances and conquests of the Nazis. [11]  In May 1940, The Netherlands had fallen under the control of the Nazi regime. The following July, Kreutzberg gave dance recitals in the theatre Kurzaal in The Hague. Krauss as well resumed his activities for Kreutzberg, while the dancer acted as -in the words of Kant- „the dancing ambassador of National Socialist Germany“. [12] 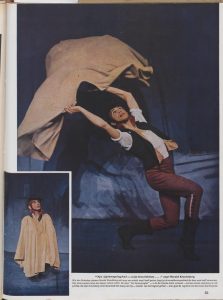 Colour photographs of Kreutzberg as Till Eulenspiegel in propaganda magazine Signal (October 15, 1940).

The dance recitals were embedded in different media for propaganda. One example is the Polygoon Journaal (Polygon News),  weekly newscasts shown in Dutch cinemas. The news bulletin of November 22, 1940, included a clip of almost four minutes of Kreutzberg dancing. In the first minute, Kreutzberg was accompanied by Krauss for a walk on Scheveningen, the beach in the city of The Hague. Besides, the newspaper Signal – financed by the Wehrmacht– [13]  carried a full-colour photograph of Kreutzberg as Till Eulenspiegel.
In 1941 the performance pattern of the previous year was repeated: in the summer Kreutzberg performed at the Kurhaus, in the autumn Krauss organized a tour on behalf of the dancer. 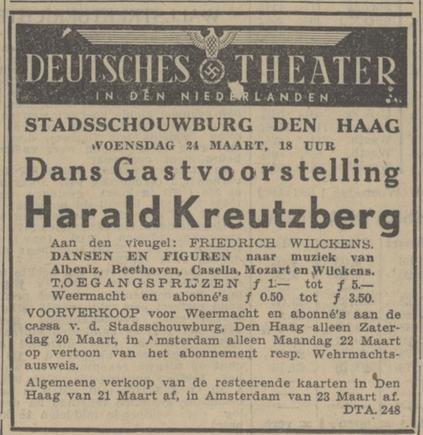 The shows in 1943 held under the auspices of the Deutsches Theater in den Niederlanden (German Theater in The Netherlands). From 1942-1944 opera, dance and music concerts were organized in different Dutch cities, intended for members of the Wehrmacht, or the unified armed forces. However, members of the general public could attend as well and critics wrote reports in the press. [14]

After the war, Kreutzberg maintained his status as the doyen of German modern dance. In 1948 he was the first German artist to go on foreign tours, performing in the United States, countries in South America and Israel (November 1948). [15] While on tour through Switzerland, France, Scandinavia. Austria and Hungary, he visited the Netherlands. Here Ernst Krauss resumed his partnership with the celebrated artist. He would organize tours every other year (in 1950, 1952 and 1954). Kreutzberg’s last performance in the Netherlands was in 1958, the year of Krauss‘ demise.