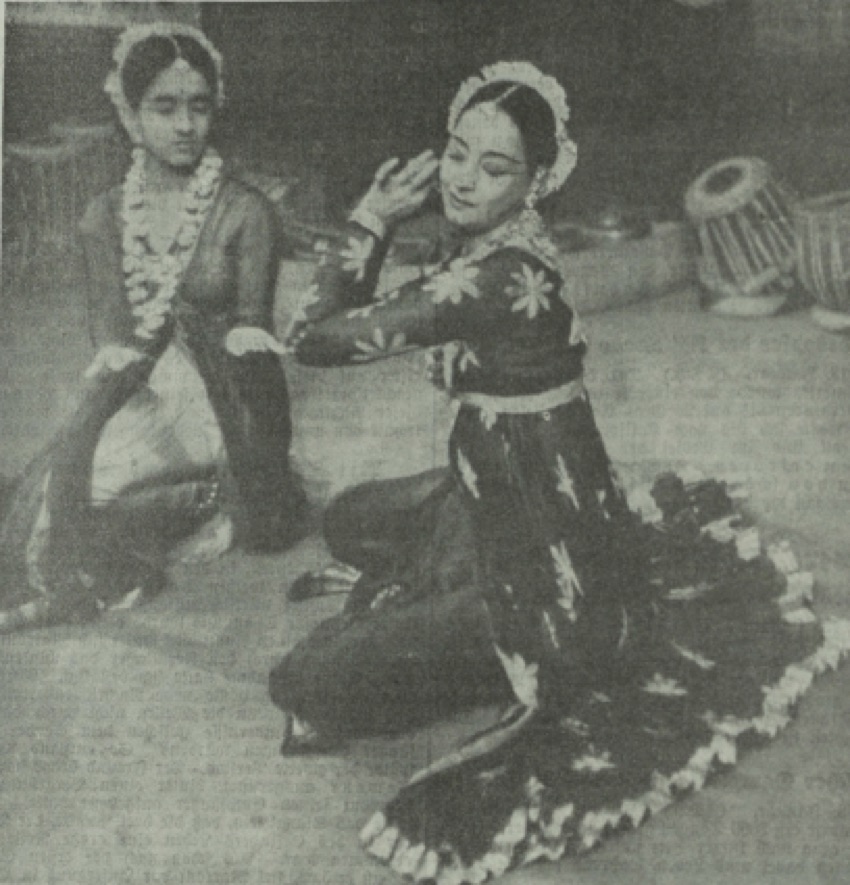 On Indian Dance and the German Quest of Religion in Art

The dance drama Krishna-Leela was created by the collaboration of Pandit Sitaram Prasad and Leyla Roy inspired by Vidyapatis (1352-1448) poetry around the myth of Krishna. A part of this piece was also performed on the German tour under the title: Viraha-Milap: Reconciliation of the God Krishna with the Goddess Radhika. Dramaturgically interesting in this play is not so much the outer, but rather the inner action.[1]  The protagonist, Radhika, the lover of Krishna, suffers from the separation. On a photo from Magdeburg we see the intimate scene in which the grieving woman takes off her jewellery. Her young servant, played by Damayanti Joshi, takes the pieces of jewellery from her. The photo seems to have been shot during the dress rehearsal of the Menaka Indian Ballett before the show in the evening of 12 January 1937 by Paul Gehlert.

The author of the review, Joachim Weinert, member of the Reichsmusikkammer, comments the evening as follows: “And we are well advised not to dismiss such an impression with aesthetic value judgments, but to descend from the Kothurn of Central European self-complacency and learn from the modesty of Menaka’s supreme art, the dancer Ramnarayan and the other members of the troupe. For here we were confronted by a clearly visible example of the close connection between man and the cosmos, which our culture seemed to have lost as a source of strength for centuries. Finding this bond again is also a task for the present, and in it the dance of faith will have an important mission to fulfil.”[2]

The scene from the mythological play has indeed a strong spiritual meaning. The lament of the woman far from her lover is a metaphor for the devoted soul longing for the divine, a common theme in bhakti (Hindu spiritual movement) devotional poetry. The theme of Hindu spirituality as opposed to Western materialism had been strongly popularized in the context of the Hindu reform movements. Vivekanandas’ (1863-1902) construction of “Hindu spirituality” transformed Hindu discourse on asceticism, devotion, and worship linking it to emergent nationalism and the idea of “serving the nation”. It was brought forward much later in Gandhi’s nonviolent activities (satyagraha).[3] This connection of religious and nationalist themes in art had a strong resonance in Germany, where the composer Richard Wagner (1813-1883) was venerated almost as a prophet from a certain circle of people that searched national renewal in the religiously charged atmosphere of the Festspiele in Bayreuth, including Adolf Hitler who visited the festival every year between 1925 and 1940.[4]