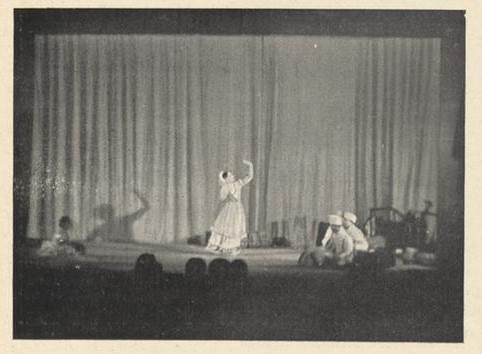 The picture shown is a photograph taken by an amateur photographer from a performance, published in the amateur photography magazine “focus” on 21-11-1936. It is the only picture of the Menaka Ballet we know so far that was apparently taken live on stage.

In his article, the photographer explains the new possibilities of different special tools for photography indoors and at night, the last image being certainly the technically most demanding one: taking an image of moving persons in artificial light. This became technically possible for a broader range of consumers only in the mid-1930s. The first Leica I camera had been launched at the Leipzig Spring Fair in 1925 and had paved the way for 35 mm film to become one of the most successful mass products of modern times. For both professional and amateur photographers, the „35 mm format“ became the dominant shooting or camera format. However, before it was possible to take such a picture, several technical developments were still necessary. The Leica III (1933-39) used here made it possible for the first time to use long shutter speeds that were suitable for shots with limited lighting. The photographer combined a relatively long shutter speed (1/8 s) with a maximum aperture (F:2) to capture the moving action on stage using a Kodak S.S. Pan., a sensitive film especially for night indoors exposures.

The scene depicted is probably from the Mughal Serenade. Here Menaka is still alone with the musicians and an indefinable person, perhaps one of the young dancers, who is supposed to bring or remove props; her partner Ramnarayan is not (yet) on stage.

Something about the image, though, leaves the viewer slightly puzzled: unlike today and in contrast to the impresario’s stage directions (see here) the musicians seem to be sitting on the „wrong“ side, i.e. on the right seen from the public. Moreover, if the picture was clicked while the dancer would stand still for a moment in an ending pose she would, according to Kathak standards, always put her weight on her right leg. It is, therefore, possible that the picture was exposed in a mirror image. This happens when the whole film is put into the enlarger upside down, a mistake that happens quite frequently in an amateur darkroom.

Nevertheless, this photograph documents the remarkable technical equipment even of smaller stages with very powerful spotlights, which contributed significantly to the dramatic effect of the stage action.