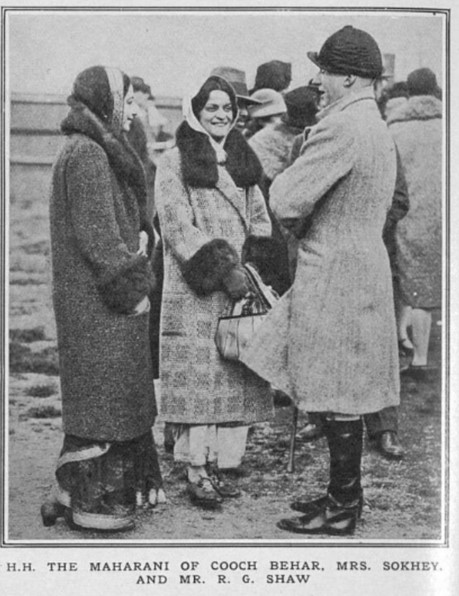 In a photograph published in October 1927 in the British newspaper “The Tatler”, Menaka is standing on the left. Although we only see her profile, she seems to be smiling during a lively conversation. The caption refers to her as “Mrs Sokhey” as she stands next to the centre of attention: Indira Raje (1892 -1968), born as the Princess of Baroda and after her marriage known as the Maharani of Cooch Behar.

Damayanti Joshi wrote Menaka “saw a good deal of Bharatanatyam during her frequent visits to Indira Raje. […] Baroda was a noted centre of dance and music and the Gaekwad’s court boasted to excellent Bharatanatyam dancers […”. [2] It was by no means self-evident that the dance Bharatanatyam from Tamil Nadu, was performed at the court of Baroda, in the western state of Gujarat. [3]

In her study of the court of Baroda’s patronage of the arts, Janaki Bakhle examined a primary source: the Kalavant Khatyache Niyam (1899), which described the royal policy towards artists. The anonymous compilers of the publication declared the period of 1846-1857 as the zenith of Baroda´s art patronage. The Gaekwad rulers supported expressions as diverse as mime, theatrical shows, North Indian khayal, and dance from Tanjore, the cultural centre of South India. Ruler Ganpatrao (r. 1847-1856) “was particularly fond of southern troupes”, a preference shared by most Gaekwads. [4]

Furthermore, the first wife of Baroda´s Sayajirao Gaekwad (1863-1939) was born in Tanjore. According to eminent dance historian Ashish Mohan Khokar, a group of Bharatanatyam dancers and musicians formed part of her dowry. These Bharatanatyam dancers and musicians remained attached to the court during the later reign of Sayajirao Gaekwad (1881-1939), Indira Raje’s father. [5]

Bakhle adds nuance to the image of Sayajirao Gaekwad as a knowledgeable protector of the arts. Instead, the artists were supported through standardized, bureaucratic rules. The arts performed at his court reinforced the grandeur of his kingship, yet he was largely absent from his court. Of each year, Sayajirao Gaekwad spent eight months or more in Switzerland and England. [6]

A few months before the photograph in The Tatler was published, Menaka had started her training under Harcourt Algeranoff, a member of the Pavlova company. Around the same time, Indira Devi came to England with her six children and lived there for two and a half years. As a prominent socialite that was part of an international jet set, she spend the winters in Melton, Leicestershire, where the British aristocracy gathered for the hunting season. [7]

It seems the royal supported Menaka throughout her dance career. After her debut in Mumbai in March 1928, Menaka returned to London where she and the maharani were invited for tea with Anna Pavlova. Newspaper articles mention Raje´s presence at a dance performance in France (1932) and Mumbai (1934), where she explained several dance items to the public. [8]