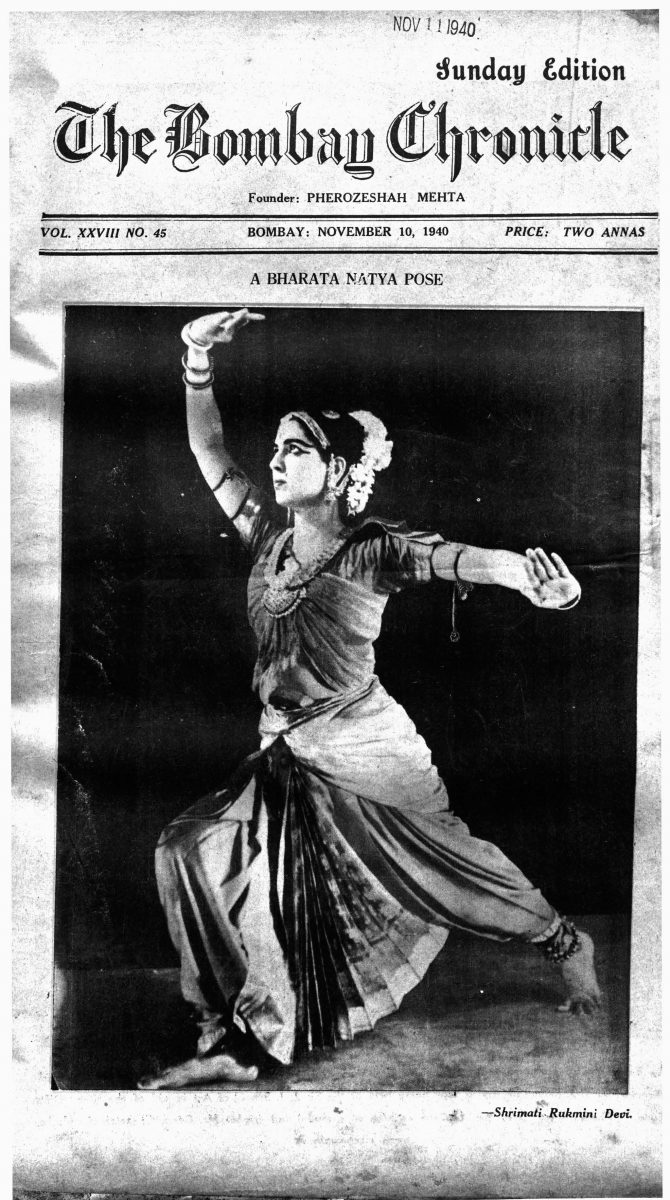 Sorry, this entry is only available in German.

Menaka’s South Indian contemporary Rukmini Devi is considered one of the protagonists in the recontextualization* of Indian dance practises in the 1930s. In several ways, both women to have followed a parallel path. Nevertheless, only the slightest mention has been found of contact between the two dancers, as yet there is no evidence they engaged in an exchange of ideas.

Several authors have scrutinized the construction of Indian dances that are now regarded as “classical” in the 1930s, a time of nationalist cultural production. It is beyond the scope of this note to detail an entire body of scholarship. Overall, these studies highlight the erasure of original practitioners, female dancers in courts and temples, in favour of middle-class, upper-caste women from urban centres. This discontinuity was reinforced as elite reformers significantly altered the technique, pedagogy, aesthetics and repertory of the dance practises. [1] An example is the so-called Sanskritization or Hinduization of the performances: both Rukmini Devi and Menaka carefully selected works in Sanskrit, as a base to choreograph religious Hindu accounts. [2] Contrary to Menaka, Rukmini Devi has received considerable critical attention.

Rukmini Nilakanta Sastri (1904-1986) was born as the daughter of an engineer in Madurai, South India. A long-time theosophist, her father moved to Adyar, a suburb of Madras (now: Chennai), where the Society had its world headquarters since the early 1880s. Aged sixteen, she married George Arundale (1878-1945), a prominent member of the Theosophic Society (TS) in Adyar. Through her marriage, Rukmini Devi became, in the words of Dixon, the most prominent Indian woman and one of the most influential women in the TS. [3] As a consequence various sections of the TS in Europe, the United States and India hold archival materials on her – an abundance compared to the paucity of primary sources on Menaka. An example: in 2020 the Amsterdam City Archives digitized the inventory of the archive of the Dutch branch of the TS. For this note, several photographs of Rukmini Devi were digitized on demand and are now available on the website of the Amsterdam City Archives. [4]

Rukmini Devi recorded her life story shortly before her demise. In the written rendition of this recording, Devi noted she saw Pavlova perform for the first time in Covent Garden, London in 1924. Two years later, in 1926, she was introduced to Pavlova in Australia and saw several of her performances there. The second tour of Pavlova to India offered the opportunity to continue their friendship. Devi recalled: “Once when she came to give a performance in Bombay we were in Benares for a Theosophical Convention. I was impatient and eager to go. The last day of her programme was the 31st of December and I said on the 29th that I could not wait for the Convention to end. Dr. Arundale […] understood my feelings and came with me to Bombay.” [5]

A short time later, in 1929, George and Rukmini Arundale commenced an extensive tour of theosophical lectures through Java, Australia, Europe and the United States. Their lecture series coincided with the performances of Pavlova: the couple and ballet company were travelling on the same ship. In Devi’s account, it was Pavlova who suggested she took up dance. “She asked me to start learning from Cleo and that she would teach me when I came to London. Unfortunately she passed away soon after.” [6]

In the written narrative, Devi’s encounter with Pavlova, her admiration and training in classical dance are emphasized. However, there were at least five years between the first performance Devi saw in London and the start of her ballet classes. In the text, it is not specified when and where Cleo Nordi taught ballet to her Indian student. Devi remarked: “We were constant on the move at that time.” [7]

The Netherlands was one of the countries the couple frequented. From 1924 to 1936, they would stay at the International Theosophic Centre in Naarden, during their European visits. From the Dutch newspaper database Delpher it becomes clear the Arundales stayed at the Dutch centre every other year in the 1930s. In 1931 and 1932 they spend May to June in the United Kingdom and the centre in Naarden. [8] When Menaka first appeared in Great Britain, France and the Netherlands, the Arundales travelled the same countries, working towards a different end.

Upon her return to India, Rukmini Devi saw a performance of hereditary dancers in the Madras Music Academy in December 1932. She would immerse herself in South Indian dance guided by hereditary masters, as Menaka had done before her. While the Menaka Ballet extensively toured through Europe, Rukmini Devi established her name as a pre-eminent dance revivalist throughout India. After her dance debut in November 1935, she opened the International Academy of the Arts, initially on the premises of the TS in Adyar. The Bombay Chronicle carried a report of her first public performance in the theatre of the TS. The performance was preceded by “an invocation to the great Deities of the Dance” and a speech by George Arundale. The newspaper quoted: “Some of us think of Swaraj, of Home Rule, but until Indian art is free and active among the Indian people, there can be no real freedom for this great land, for it must have a free art which spreads far and wide.” [9] 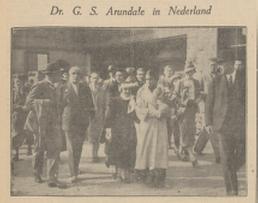 George Arundale and Rukmini Devi arrive in Utrecht, the Netherlands (Haagsche Courant, May 6, 1936)

Two months after Devi’s “Bharat Natya” performance, in May 1936, the couple journeyed six months through Europe to pay visits to theosophic ‘lodges’ in the Netherlands, the United Kingdom, Scandinavia, Italy, Germany and Switzerland. At the same time Menaka´s `Hindu Ballet` received rave reviews in European newspapers, Rukmini Devi delivered lectures on “India’s genius in the arts” and “The message of beauty to civilization”. [10] Although they both crisscrossed Europe in the 1930s, it is highly unlikely they met on the continent.

After their return from Europe, Menaka and her company completed an ‘All India” tour from November 1938 until February the following year. One of her obituaries stated it was in South India Menaka “came I contact with Bharat Natya artistes and Kathakali exponents […] Getting first-hand knowledge of the dance centres in South India she established the Nrityalayam at Khandala.” [11] The obituary seems to imply Menaka visited the art institute Rukmini Devi had founded – by then renamed Kalakshetra, “temple of the arts”. Even so, no sources have been found to confirm the Bengali dancer met her Tamil counterpart in Adyar. 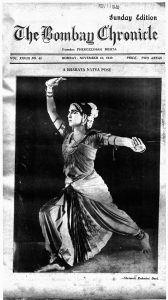 The Bombay Chronicle offers slight evidence the two women were on a friendly footing. The newspaper reported on performances of Rukmini Devi in the city in November 1940. A year later, Rukmini Devi opened the Bombay ‘dance season’ with two performances (October 10 and 16) at the Capitol Theatre. [12] A small comment, although in jest, proves Menaka witnessed the performance: “Madame Menaka, India’s “premier danseuse”, gracefully walked on the stage and garlanded, without any speech in the pure Kathak manner, Mrs Rukmini Devi, India’s “premier danseuse”, at the end of the Bharata Natya exposition the latter gave Friday last.” [13] 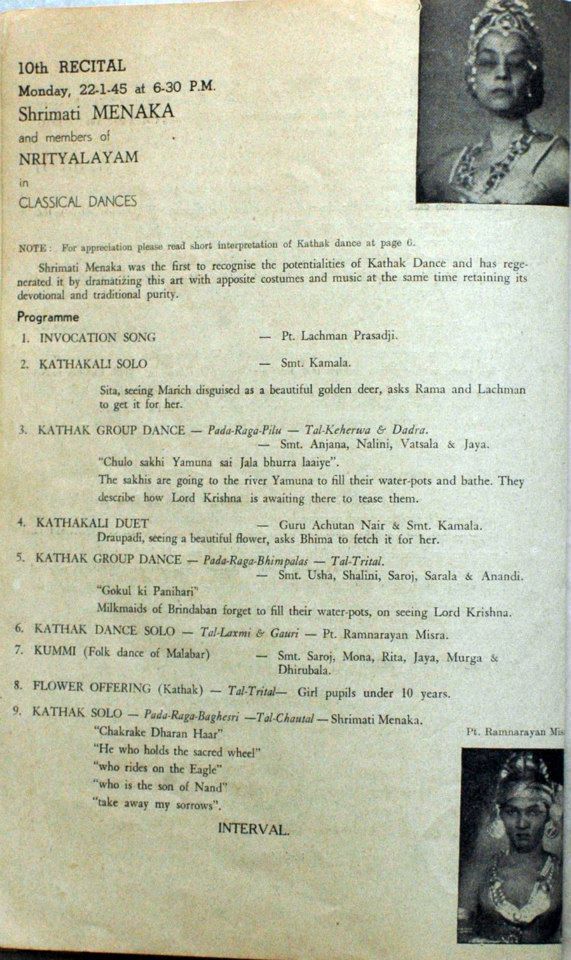 Page of the program souvenir of the All India Dance Festival in Bombay, January 1945.

Both dancers and their groups were amongst the artists who performed during the All India Dance Festival, held in the Excelsior Theatre in Bombay (January 18-24, 1945). The festival program shows the prestigious position of Rukmini Devi throughout the festival. Besides the inaugural recital, together with students of Kalakshetra, she presented dance dramas from Tamil Nadu and Kerala. [14]

Menaka and members of her institute Nrityalayam danced one evening, the festival program introduced her as “the first to recognise the potentialities of Kathak Dance and has regenerated it by dramatizing this art with apposite costumes and music at the same time retaining its devotional and traditional purity.” She danced one solo and in a group dance with her students. [15]

From the festival program, another development becomes apparent: the emergence of male, hereditary Kathak dancers. Gauri Shankar, who had toured Europe with the Menaka Ballet, performed solo on the second evening of the festival. Moreover, brothers Achhan Maharaj and Shambu Maharaj presented recitals, they were both described as: “one of the greatest exponents of Kathak Dance. He is the son of Maharaj Kalka Binda, the greatest Kathak preceptor of revered memory.” [16] This could be indicative of the “shift in authority” within Kathak, as construed by Walker: “the male participants in the tradition, the hereditary Kathaks, became the dance’s owners and disseminators.” [17] The eminence of the male Kathaks contributed to the little significance Menaka received in the histories of Kathak. [18]