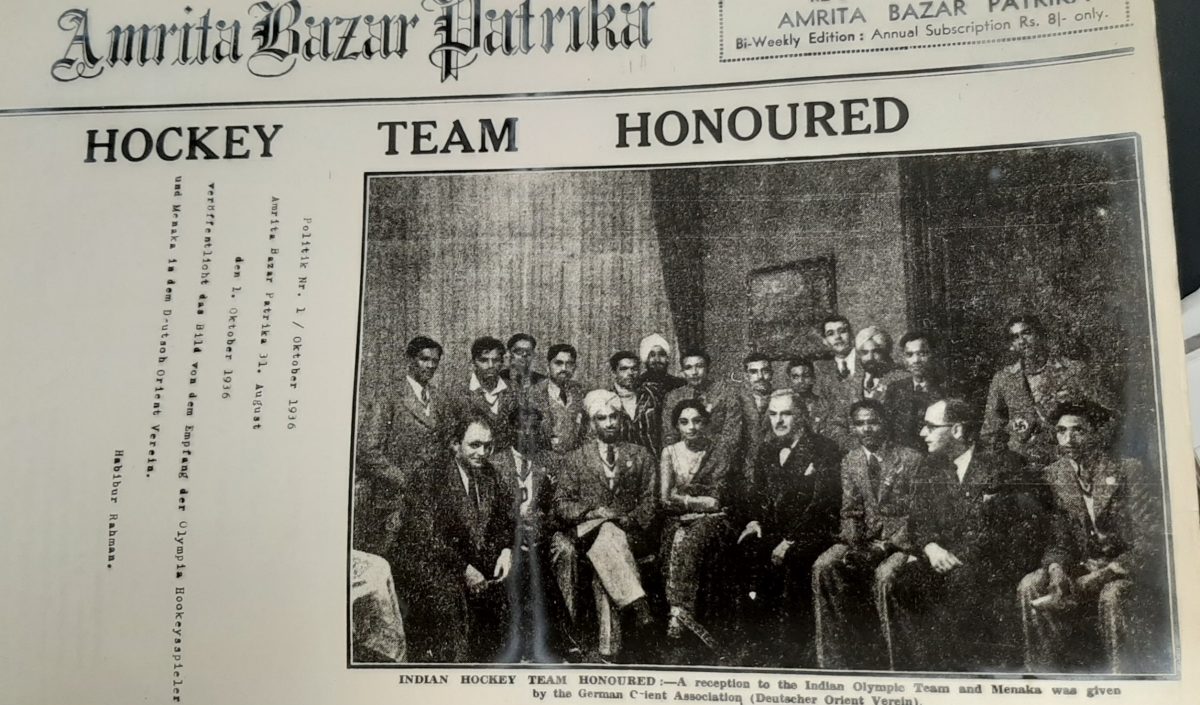 On 11th August 1936, Amrita Bazar Patrika, the Calcutta based English language daily known for its nationalist leanings, displayed a large photograph under the proud heading, printed in capital letters: “Hockey Team Honoured.” The photograph, preserved at the Political Archive of the German Foreign Ministry in Berlin, depicts the Indian hockey team which had won the gold medal at the Olympic Games held in the summer of 1936 in Berlin, at a formal reception in the German capital. [i]

However, the photo features not only the victorious team. Present alongside the players are a few official looking German gentlemen and most notably, an Indian lady wearing an ornate sari. The lady, looking perfectly at ease at the centre of the photo, is Madame Menaka, the dancer from Calcutta who was touring Germany with her troupe at the time.

The caption of the photograph informs us that the reception was hosted by an organisation called the Deutsche Orient Verein (German Orient Association or DOV). The DOV had come into existence in 1934 with the agenda of catering to Nazi Germany`s economic and political concerns, primarily in the Near East.[ii] However, the DOV also had an interest in India, for which it had set up an “India committee.” This committee comprised German bureaucrats and industrialists having political or commercial connections with India as well as several Indians living in Berlin, who offered various services to the Nazi regime.

Though the DOV focussed mainly on commercial ties between Germany and India, it also occasionally performed the political function of trying to disseminate a positive image of National Socialist Germany in India by influencing the Indian press. This photograph was undoubtedly a manifestation of this brand of “cultural politics.” Such propaganda ventures by the DOV were financed by the German Ministry of Propaganda as well as the Foreign Ministry.

Madame Menaka`s presence in the photograph was not purely ornamental. The “Oriental spectacle” which she presented through her performances was highly appreciated in Germany. A measure of her success was that the Menaka Ballet was invited to perform at the Berlin Olympic. [iii]This was a rare feat, since Hitler and his cohorts cherished no high opinion of Indians. There were also repeated instances of racially motivated humiliations of Indians in everyday life in Germany after the Nazis came to power. The racism faced by Indians in Germany was written about in the contemporary Indian press, which understandably contributed to a negative image of Nazi Germany among large sections of Indians.

The DOV evidently considered it to be a necessary task to counter the adverse portrayals of Nazi Germany in India. By bringing together Menaka, a successful symbol of Indian performing arts and the hockey team with its freshly won laurels, the event organised by the DOV co-opted these Indian celebrities in the National Socialist cultural propaganda towards India, conducted in the context of the Berlin Olympic, an event that was meant to project Nazi Germany`s prestige in the world. The photograph was intended to be a testimony to Nazi Germany`s encouragement of and esteem for Indian cultural icons and by extension, the people of India. Simultaneously, honouring the “oriental” dancer and the young champions from the British colony seemed to add to the cosmopolitan credentials of a purportedly rejuvenated German nation under Hitler.

The political purpose of the photograph becomes evident from the few typewritten lines seen on the side of the photograph. Dated 11th October 1936, and bearing the name of Habibur Rahman as the writer, the short notice is marked “Politik I” indicating that it was meant for a political authority of the “Third Reich,” which in this case was the Foreign Ministry. The lines confirm that the photograph was published in the Amrita Bazar Patrika on 11th August.

Habibur Rahman, an Indian living in Berlin from the 1920s, was one of the most prominent Indian propagandists for the Nazi regime. He was a paid agent propagating Germany`s official viewpoints in the Indian press. Rahman was also active in the DOV. Presumably, it fell under his duties to make sure that this photograph appeared in the influential English daily.

The photograph associating Madame Menaka and the Indian hockey team thus remains a symbol of Nazi Germany`s effort to make use of Indian cultural and nationalist pride for its own political ends, with the Olympic games serving as a suitable backdrop.