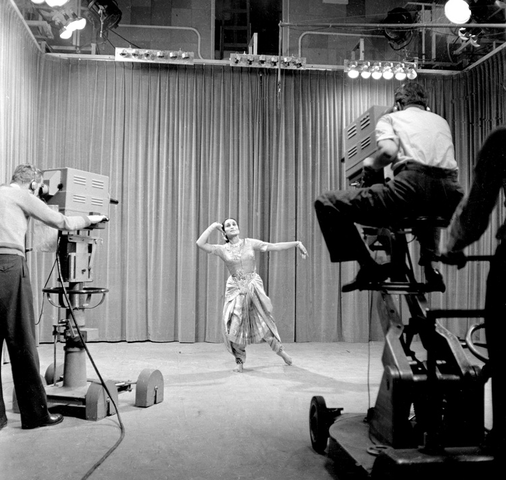 In 1951, the Dutch Queen Juliana organized the first of a series of religious conferences. In his dissertation on these gatherings, historian Han van Bree included two photographs of Hima Kesarcodi. The Indian dancer was the niece of Menaka and thirty years old at the time. She was a guest at the meeting of Juliana [1] and in 1951-1952 she performed in The Netherlands. Whereas her aunt was announced twenty years earlier as a Kathak dancer, Kesarcodi presented Bharatanatyam as a “four to fivethousand years old Hindu dance”. [2]

Information on the artistic career of Kesarcodi can be found in a programme leaflet of the dance drama “Birth of a Nation” (1948), directed by her and her husband Prabhar Kesarcodi. A short biography states:

Mrs. Kesarcodi has been connected with the theatre and Radio in Bombay since 1939 – Apart from hailing from a family famous for their artistic achievements, She has herself been brought up in the strictest school of theatrical tradition – Dancing – both Indian and ballet were taught to her from the age of three, but her love and attachment for theatre really proved itself in Engeland when during the course of ten years in order to continue her dramatic training as an external student of the Royal Academy- shehad to go through many deprivations. [3]

Kesarcodi’s theatre company “Chitra Players” was connected to Menaka through her former dance students and her Guru Krishnan Kutty (1924-1992).He taught Kathakali at Menaka’s residential dance school for Kathak, where he took the step to train in Manipuri and Bharatanatyam as well. [4] In 1947 they worked together for the adaptation of Tagore’s play Chitra into a dance drama. [5] For “Birth of a Nation” , the dance  “Weeping women” was choreographed in the style of Kathakali, depicting the suffering of bereaved mothers. According to the programme leaflet, the dance Natanam Adinar (“He danced”) was incorporated into the play. This choreography on the cosmic dance of Shiva was newly created in the 1940s and remained a popular part of the Bharatanatyam repertoire well into the 1960s. [6]

As part of her Dutch performances in 1951-1952, Kesarcodi danced Natanam Adinar, as well as a padam – a lyrical, melodic composition. The theme of the padam formed a stark contrast with that of Natanam Adinar. In Thaye Yashoda Tamil poet Venkata Subbaiyar (c.1700-1765) worded the complaint of a gopi (milkmaid) to Yashoda, the foster-mother of Krishna: He looked so endearing mother, that when he came near / I lifted him and hugged him as I would my own child / And do you know, next, what happened? / As if he were my lawful wedded husband/ He caught hold of my face and kissed me: It was no child’s kiss, this, mother./

A review in the Dutch newspaper “Het vaderland” might explain this contrast in Kesarcodi’s repertoire. The journalist does not mention Krishnan Kutty, but names Govindraj Pillai (1914-1984) as her dance teacher. [7] In 1945, he founded the Sri Rajarajeswari Bharata Natya Kala Mandir in Mumbai; Kesarcodi’s city of residence. Nattuvanar (Tamil for ‘dance master’) Govindraj Pillai had married into the Kuppaiya family, who belonged to the community of hereditary dancers; the family received patronage from the Tanjore Court between 1798-1832.[8]
This might be an indication as to why Kesarcodi performed items on her European tour that were composed by the Tanjore Quartet, four brothers who served as court musicians in Tanjore in the early nineteenth century. They composed lyrics, music and choreographies for courtly dance performances while professionalizing the training, practice and presentation of dance. The compositions of the Tanjore Quartet were dedicated to the local deities of Tanjore and Travancore, although the majority praised royal patrons. Moreover, the court dance repertoire was -in the words of Soneji- “embedded in the poetic world of erotic lyricism.” [9]

Kesarcodi danced two different varnams of the Tanjore Quartet in 1951 and 1952. A varnam combines abstract and expressive dance, lyrics, spoken rhythms, sung rhythms and solfège. She danced ‘Sakhiye Inda Velaiyil’, about a young woman who longs to be united with her true love Krishna, and ‘Danike’, in which a court dancer praises ruler Sivaji II (r. 1833-1855), the last king of Tanjore before the annexation to the British in 1856. [10]