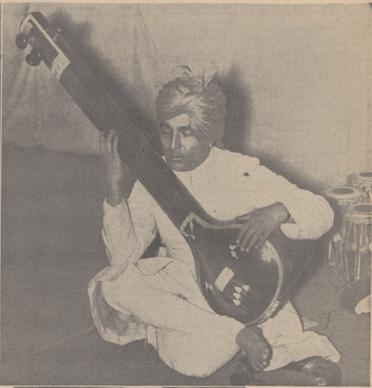 A photograph in the newspaper ‘De Noord-Ooster’ captured musician Ambika Charan Majumdar during the performance in Veendam, The Netherlands. According to Damayanti Joshi, Majumdar (*1905, also Ambique Majumdar) was the music director longest with the Menaka Ballet. [1] Majumdar’s musical career is a notable achievement in the institutionalization of music education in India. Being one of the first to graduate from Marris College (founded in 1926 by Vishnu Narayan Bhatkhande in Lucknow), he was able to play several instruments and could join the Menaka orchestra whenever necessary. In February 1936 when the Menaka Ballet toured in The Netherlands, Majumdar sat on stage together with the musical authority of his former professor at Marris College Sakhawat Khan. Several reviewers stated that it was Majumdar who gave a short explanation of  ‘Hindu music.’  A journalist of the daily newspaper ‘De Telegraaf ‘saw in Majumdar: ‘the leader of the orchestra, an enthusiastic artist who is committed to preserving – what he calls- the classical music of his country.’ [2] In a vocal solo Majumdar sang about a boatman who longed for faraway places. [3] It is Majumdar’s voice, which has been preserved in the sound recording from the Hamburg Volksoper: (https://menaka-archive.org/en/personen/ambique-majumdar/#document=617)
Menaka and her troupe returned to India in 1938. From October of that year to January 1941 they embarked on four tours in India. Perhaps because her focus was on dance, Joshi didn’t specify whether Majumdar was in the orchestra during these years. The sources however tell us he stayed in Europe. Sakhawat Khan mentions in a letter he wrote shortly before returning to India that „Majumdar was left in Italy by Madam Sahiba, and he went back to Germany“. The next time Majumdar’s name appears, it is in a document of the intelligence bureau of the colonial Government of India: ‘Notes on suspect civilian Indians on the Continent of Europe.’ According to the intelligence bureau, the Bengali musician received a scholarship to study music in Königsberg (present-day Kaliningrad, in Russia), until 1939. [4] Whereas Menaka’s endeavours in dance can be called ‘cultural nationalism’, Majumdar became involved in an outspoken political nationalism. His whereabouts until 1941 are unknown, but in November of that year, he became active for the Free India Center in Berlin. [5] The center belonged to the Azad Hind (Free India)  organizations established by nationalist leader Subhas Chandra Bose (1897-1945). Bose had escaped to Germany from India in April 1941. His biographer calls Bose’s alignment with Nazi Germany, Italy, and Japan ‘a pact with the devil’. Bose suggested the Nazi leadership an invasion of India by a German army, in the hope this would encourage Indian armed forces to join the attack on the British Empire.[6] For the Free Indian Center Bose recruited Indian students and exiles from widely different local, religious and linguistic backgrounds. Kuhlmann states Bose had known Majumdar’s family from Calcutta and the musician set up Namaste Hind;  broadcasts on Indian culture for the Reichs-Rundfunk-Gesellschaft (Reich Broadcasting Corporation). [7] In 1943 Bose traveled to Japan – in a German submarine.
Ambika’s whereabouts in Germany, instead, remain obscure. In Bose’s biography, the name of his former collaborator Ambika appears again as a footnote. According to this, Ambika was among the victims of the bombing of Dresden in February 1945. [8] [1] Damayanti Joshi, Madame Menaka (New Delhi 1989) 18.
[2] T. ‘Dansavond Menaka. De Muziek’, De Telegraaf (February 12, 1936). Retrieved from Delpher: http://resolver.kb.nl/resolve?urn=ddd:110576711:mpeg21:p010
[3] ‘Britsch Indisch ballet Menaka met Hindoe-orkest. Solo- en balletdansen; solonummers van Indische musici in den schouwburg Odeon’, Provinciale Overijsselsche en Zwolsche courant (February 24, 1936). Retrieved from Delpher: http://resolver.kb.nl/resolve?urn=MMHCO01:000088968:mpeg21:p003
[4] Jan Kuhlmann, Subhas Chandra Bose und die Indienpolitik der Achsenmächte (Berlin 2003), 172.
[5] National Archives of India, External Affairs Department, File No.301-X\46
[6] Sugata Bose, His Majesty’s opponent. Subhas Chandra Bose and India’s struggle against Empire (Cambridge; London 2011) 203.
[7] Jan Kuhlmann, Subhas Chandra Bose und die Indienpolitik der Achsenmächte (Berlin 2003), 172.
[8] Sisir Kumar Bose, Alexander Werth (Ed.) A Beacon Across Asia: Biography of Subhas Chandra Bose (Hyderabad 1996), 111

“A Hindu woman speaks to you”