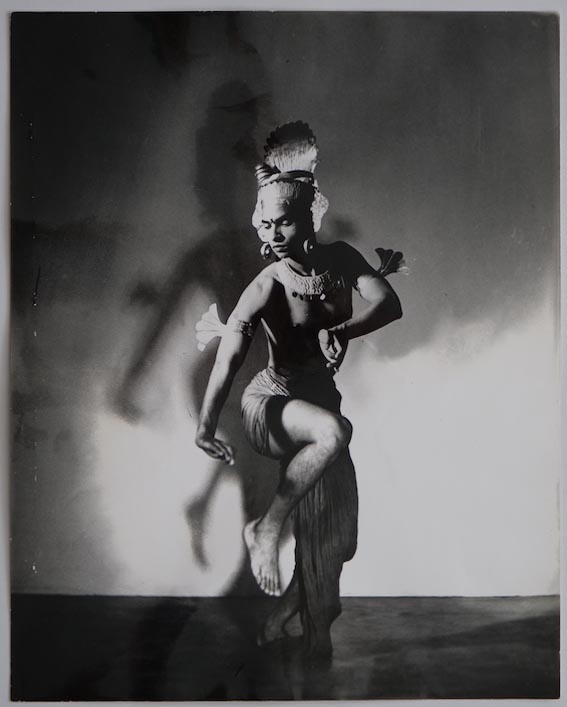 Photographs Around the Globe 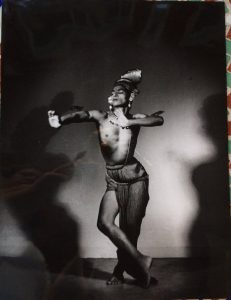 Siegfried Enkelmann was the most renowned German dance photographer and has not only documented but also shaped with his unique style the visual side of German dance from the early 1930ies to the 1970ies in countless studio photographs of dancers like Mary Wigman, Harald Kreutzberg and Dore Hoyer, with whom he exchanged regularly letters until long after World War II.

Enkelmann came to Berlin in 1921 and worked from 1927 to 1929 as an assistant in the photo studio of F. H. Nolte – which specialized in advertising photos – and was then an employee in Hans Robertson’s studio.  Here he worked primarily in the field of dance photography and as a portrait photographer. When Robertson prepared his emigration – he was Jewish – he left his studio to his assistant in 1933 and emigrated to Denmark. Enkelmann lived together with Irene Krämer, who had been also trained by Robertson and the couple announced their business for “movement photography in dance and artistry”. They were probably bombed out after 1942 and took shelter in the house of other photographer friends. Until the end of the war, the couple had to go into hiding and, since Irene Krämer was also Jewish, they were could not get married until 1945. Until then they had to cope with everyday hardships in the war-stricken capital, for example sharing only one food ration card. In 1960 Enkelmann and his family moved from Berlin to Munich.

From his earliest works, Enkelmann omitted consistently any kind of props and focused on the mere effects of light and darkness. His studio was technically at the cutting edge: “a 9 x 12 micro-reflex camera with a luminous intensity of f:35 and a focal length of 16.5″ the special effects were achieved according to Enkelmann with “two laterally arranged headlights of 2000 watts. The entire lighting system has a power consumption of 15,000 watts”. He has developed a very original style depicting dancers in dramatic lightning and poses using also collage and double exposure techniques. 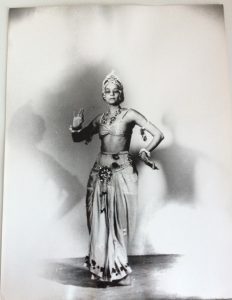 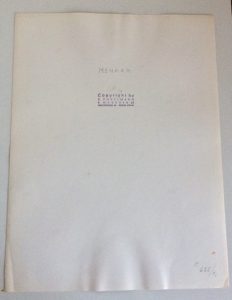 Siegfried Enkelmann’s photo archive was acquired by the German Dance Archive Cologne. It contains a small number of glass plate negatives as well as over 30,000 medium format film negatives from the 1930s, 35mm negatives, and post-war slides.

The photographs showing Ramnarayan and Menaka were probably taken in Berlin during one of the company’s stays in the capital in 1936. The remarkable illumination and the subtle play with the dancer’s shades show the minimalistic, yet very expressive use of the camera which was typical for Enkelmann. Getting photographed by the “number one of Germany’s dance photographers” the Menaka Ballet became also visually part of the German dance avant-garde, where they were situated since their performance during the Tanzwettspiele. The pictures were probably reprinted later in Munich, maybe for the first complete exhibition of Enkelmann’s oeuvre in 1978.

These prints of the Indian Dancers are not conserved in the Dance Archive in Cologne but were acquired by the author via an online auction site. The prints arrived in Germany from New York with the following explanation:

“Regarding your question of how the pictures came to America, I am a friend of the son of the late partner of the photographer Siegfried Enkelmann. Towards the end of his career, Enkelmann dissolved his photo archive, he donated most of the material to the Dance Museum (in Cologne, I think) and gave about 500 prints to his life companion, who in turn later passed on the collection to her son, who is German but lives in New York and is a jeweler. I am a photographer myself and have photographed his jewelry for years. A while ago I also cataloged this collection of dance photographs and I am helping him to sell it online.”  (Ralf Graebner, photographer, e-mail to the author, 30.12.2019. Translation from German by the author.)

Shared Spirits of Poetry and Nation