Did Menaka dance for the “Führer”? 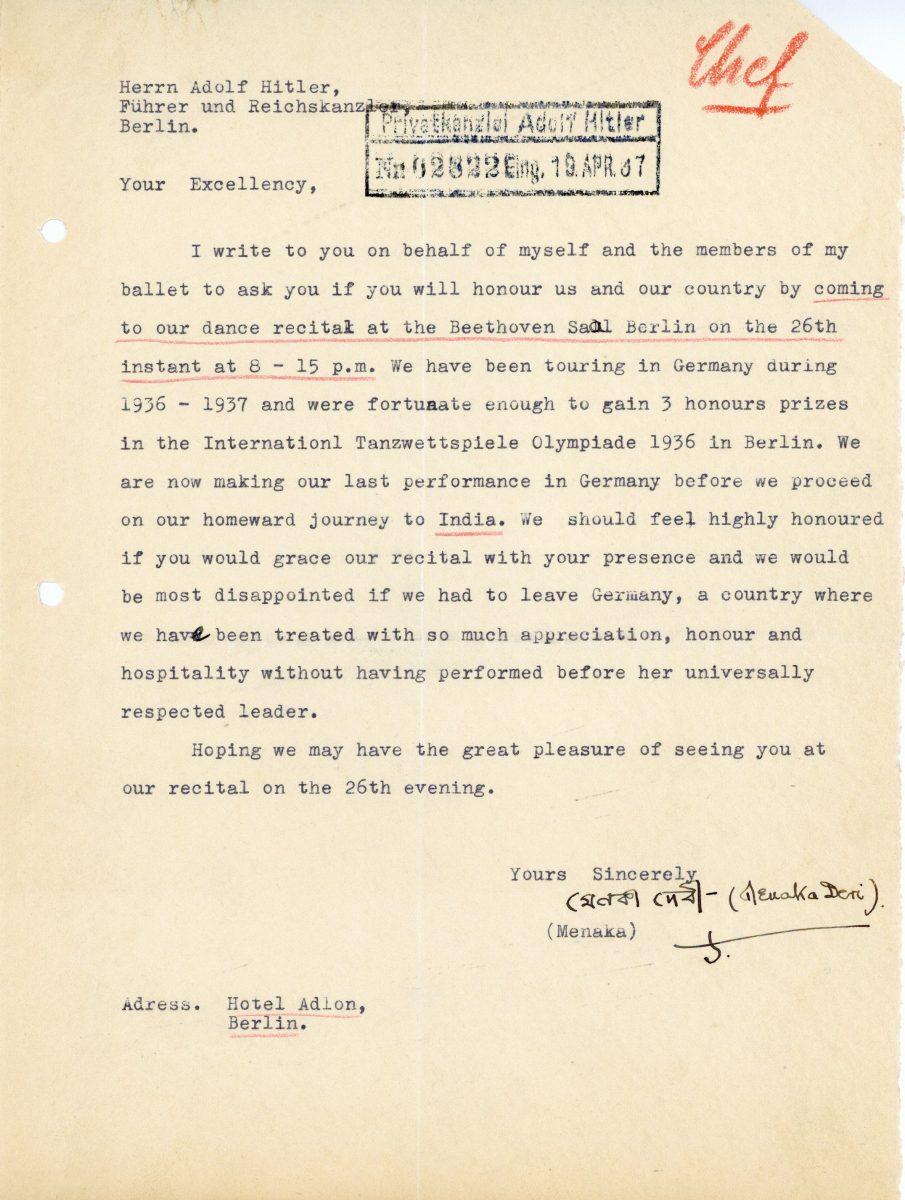 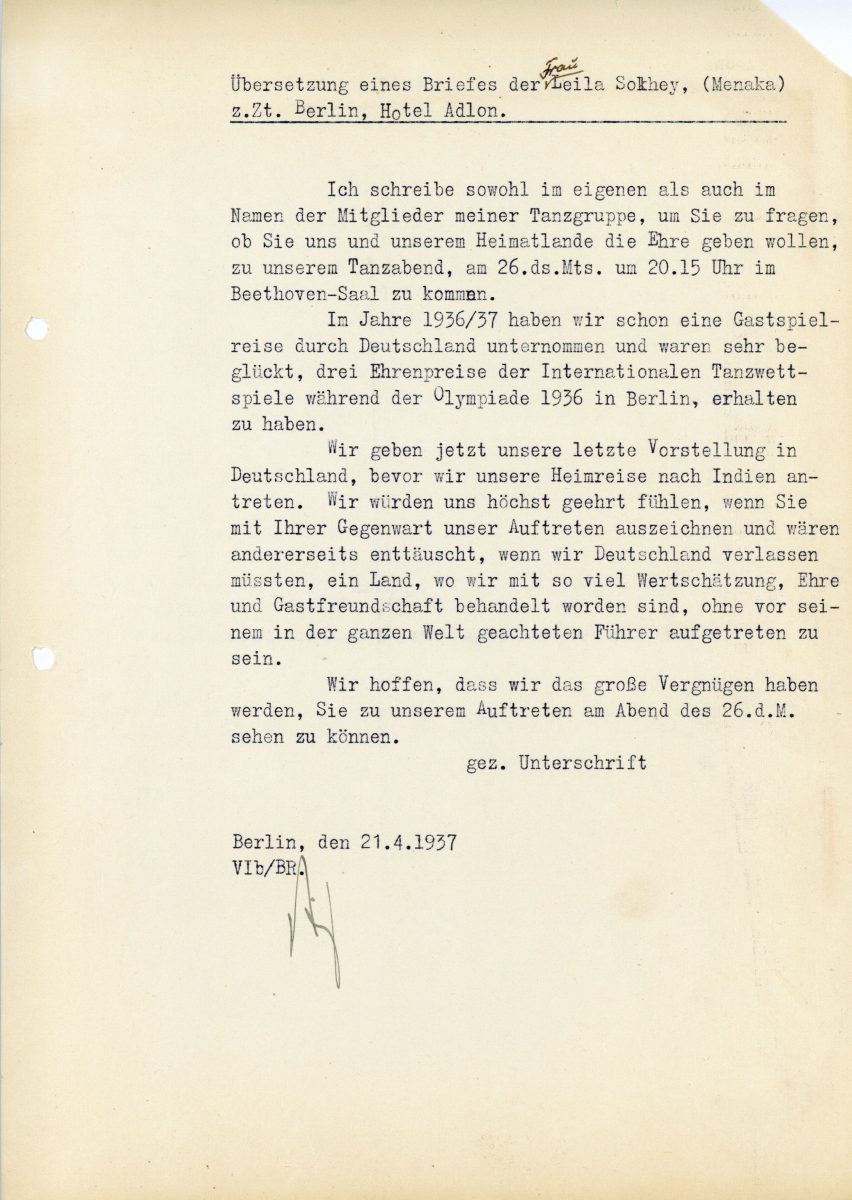 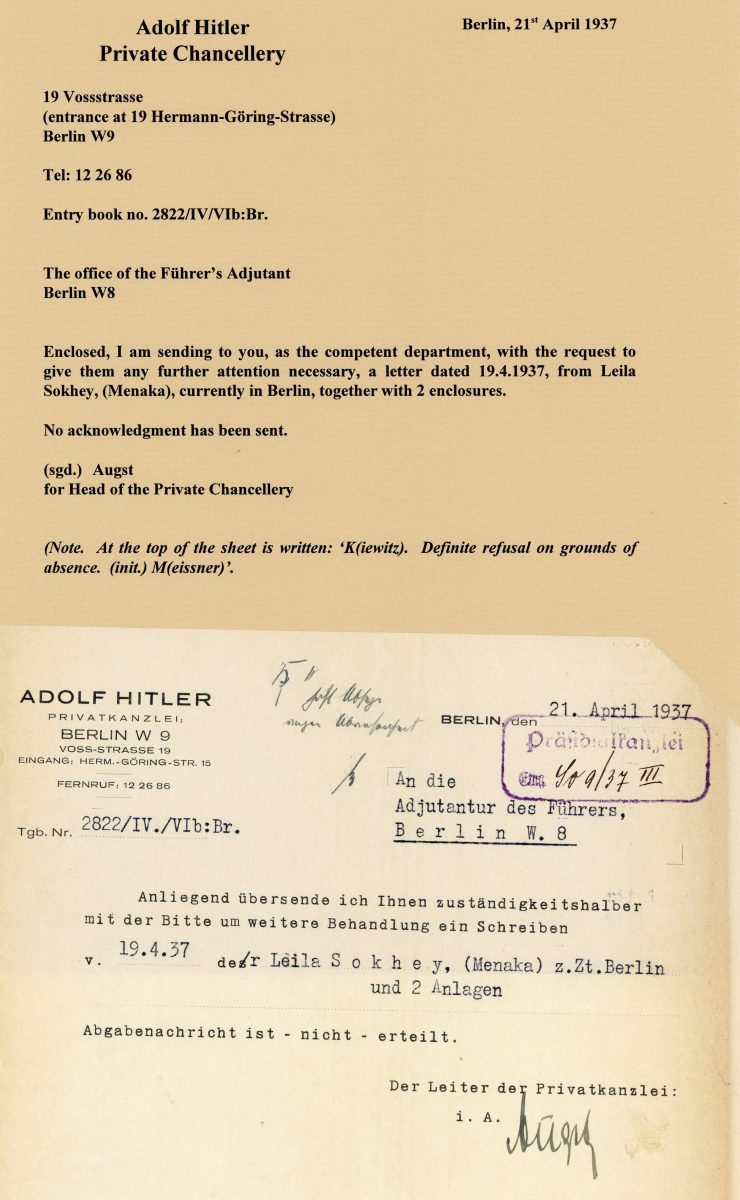 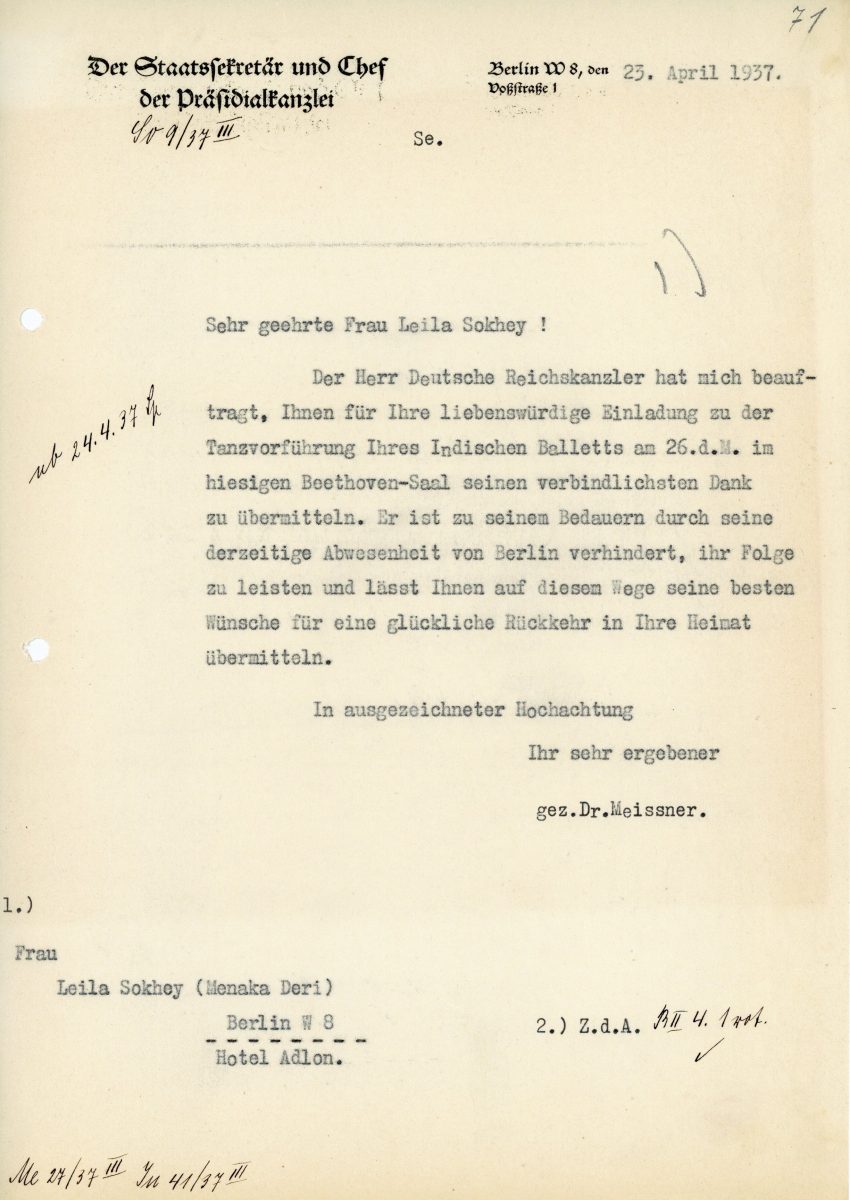 Did Menaka Dance for the "Führer"?

New Material from the Sayer Archive

Sakhawat Khan’s private diary notes contain an entry, according to which he himself performed as concertmaster of the Menaka Ballet before the most powerful statesmen in Europe, Mussolini in Italy, there also before the king of Kabul in Italy, and others, including Stalin. Adolf Hitler himself is also said to have been one of the enthusiastic spectators. (1) On the one hand, this enumeration fits very well into the narrative of a musician whose ancestors had always worked as court musicians and who were dependent on the economic and political influence of their patrons. In any case, the references of many royal clients used to increase the market value of an artist, usually hailing from a tradition of hereditary families, who himself functioned as a kind of status symbol in the prestige economy of pre-colonial India. The status of these performers had to be renegotiated in emerging globalisation of the arts when the patronage system significantly changed and the knowledge of artistic techniques was taken up also by other agents. (2)

Nevertheless, the question of the Menaka Indian Ballet’s performance in the presence of the Imperial Chancellor has not yet been answered. According to Sakhawat Khan’s account, he was invited to tea by Hitler. (3) In any case, there is proof of his participation in the dance competitions on the occasion of the 1936 Olympics by means of an original certificate (or its copy), as well as a medal with the artist’s name engraved on it. For the troupe, these favours from powerful patrons were of great importance and also, in a way, an expression of a new form of politically protected art after the marginalisation of courtly Mughal culture in northern India as a result of the restructuring of the political arena in the context of colonisation. Therefore, such “pieces of evidence” are also used as part of the press material for promotional purposes on their planned second tour of British India and Dutch East indies, which was to follow the tour of Germany. 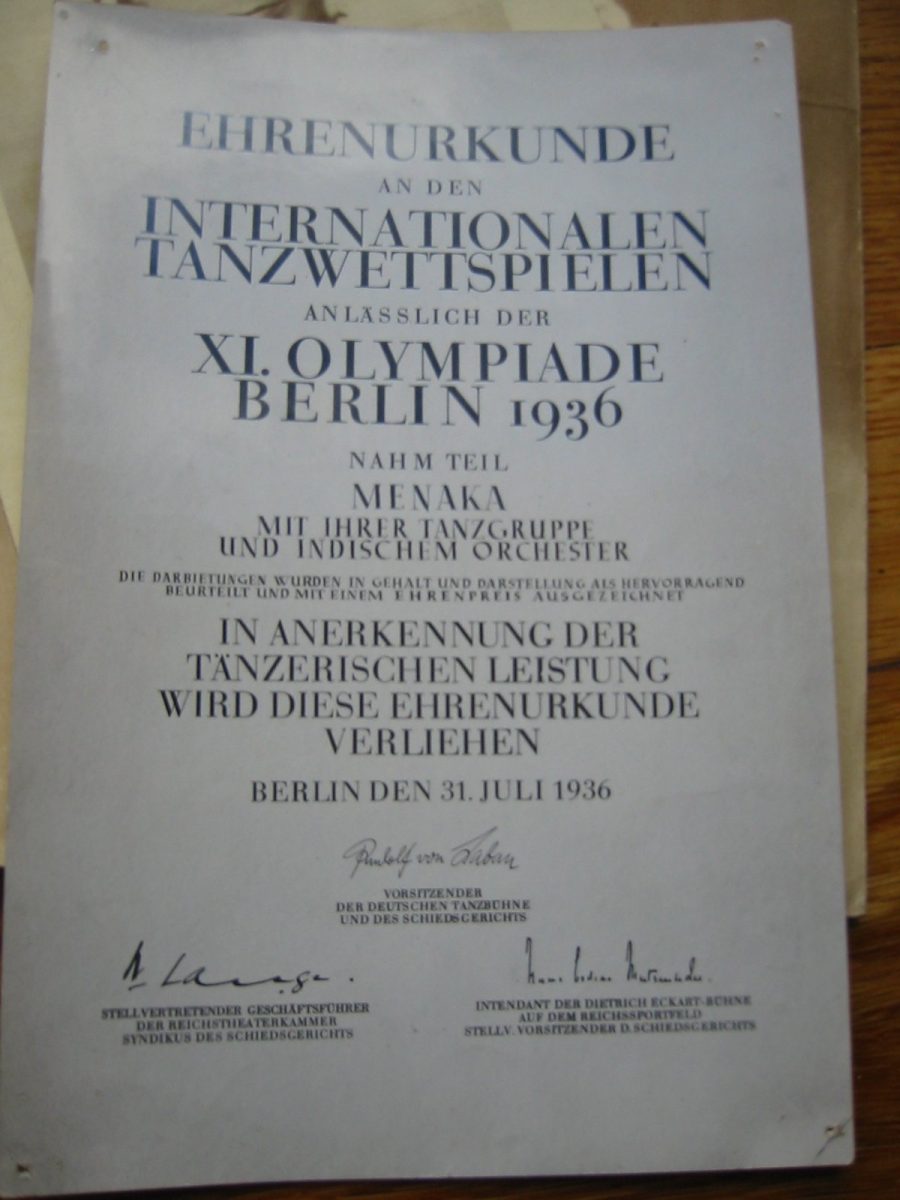 A bundle of new material, kindly provided by World War II historian Ian Sayer, sheds further light on this issue and shows how close Menaka and her troupe had come to their dream of actually performing in front of the “Führer”. In fact, Menaka had expressed some doubts about her acceptance by the German head of state two years earlier, on February 18, 1935, in an interview in the Indian newspaper The Hindu:

– When she toured the capitals of Europe two years ago (in 1931-32, note by the author) she was very well received, especially in Berlin, “But I do not know if Hitler will tolerate my presence,” she added smiling, “I hear that he has proved to his own satisfaction that Indians are non-Aryans.” –

Nevertheless, she herself has written a personal letter to Adolf Hitler inviting him to their performance at the Beethoven Hall in Berlin on 26 April 1937, saying that they were about to return to India and would therefore regret it very much if we had to leave Germany, a country where we have been treated with so much appreciation, honour and hospitality. Menaka included several program leaflets and a (presumably recent) review of a performance at the Stadttheater of Mainz.

At that time, the troupe was staying in Berlin at the Hotel Adlon. The note “Chef”, as well as a careful translation into German, testify that this letter was processed quickly.

As Sayer writes (4): “The letter was received by Hitler’s Privatkanzlei and forwarded to the Office of Hitler’s Adjutant by one of the staff members – Martin Augst. The original letter has some handwritten comments by Otto Meissner. This annotation is directed to Werner Kiewitz and tells him “Absage wegen Abwesenheit” – refusal on grounds of absence (meaning Hitler would not be in Berlin).”

The invitation circulated, thus, as can be seen from the internal memo with processing note, through the different levels of the Privatkanzlei and was duly replied. The polite official refusal sent by return post to Leila Sokhey aka Menaka at the Hotel Adlon includes best wishes from the Imperial Chancellor for a happy journey home.

As can easily be seen in the material in the Menaka archive, this was of course not their last guest performance in Germany, the troupe was in Europe until well into 1938 and had originally planned to come back in 1939, cf. the letter from the impresario Ernst Krauss to the opera management in Stuttgart of 15 November 1937, but for well-known reasons, this was no longer possible.

Although it has not yet been ascertained that the Menaka troupe performed before Hitler or Stalin and were presented with gifts by them, these narratives belong in any case to the history of the performative arts in South Asia in a time of transition, after the disappearance of the patrons of the Mughul palace culture and before a reinvention of the so-called classical Indian arts as a state-bearing element of national identity after independence and the partition of the subcontinent.

Ian K. T. Sayer is a British entrepreneur, World War II historian, author and investigative journalist. Among his books are the bestsellers Nazi Gold (1984) and Hitler’s Last Plot (2019). During the 1990s Sayer continued to build, evaluate and catalogue his 25,000 volume library and World War II document collection. Generally accepted as one of the world’s leading experts on Third Reich documentation and signature identification, he now acts as the curator of the Ian Sayer Archive, making its contents available to institutions including the Imperial War Museum, other historians, authors and professional researchers of the period.
Nazi Gold Website: http://www.nazi-gold.com/
‘The Storm of War’ and embedded video taken in the Ian Sayer Archive: https://www.youtube.com/watch?v=0EJZL_WwxK4