Little is known about Menaka’s work after her return from Europe. We know that she was creatively active for about 10 years until her much too early death in early 1947. Since a planned further tour of Europe and the USA was not possible due to the turmoil of war, she toured India and South Asia with her group. Back in Bombay, she opened her school and created new dance productions about which, unfortunately, little is known. A lucky coincidence completed this picture and brought a lot of new sources into the Menaka archive. We met for an interview with Karen McKinlay Kurnaedy. She is a teacher, researcher, dancer, and dance educator. She has a PhD in Arts Education from Simon Fraser University and her research focuses on phenomenological investigations of bodily perceptions generated while dancing, dance and spirituality. She has recently published a new book about her dance teachers, Magda and Gertrud Hanova. Karin shared with us her teachers’ encounter with India and their love for the dance, which reflects the changing history of the 20th century.

In her new book Our Love Affair with Dance, she tells the life stories of the two dancers and enriches them with numerous photographs and other archive material. The sisters, women of Jewish origin from today’s Karlovy Vary, had studied dance at the most important European institutions and ran a successful school in their hometown. In the 1930s thy fled Europe just in time with their husbands and father. They escaped repression, expropriation and violent death and found a new home in Bombay, a thriving colonial metropolis. There they continued to teach dance and worked also for many years in dance with Menaka, with whom they shared a close and deep friendship.

After Menaka’s death and the partition of India, they set out from Bombay and eventually reached Vancouver in Canada. There they opened a dance school that flourished for decades with their unique style. In their suitcases, between beautiful costumes and props from India there was also Menaka’s orange silk skirt that she had worn in many performances and her ankle bells. 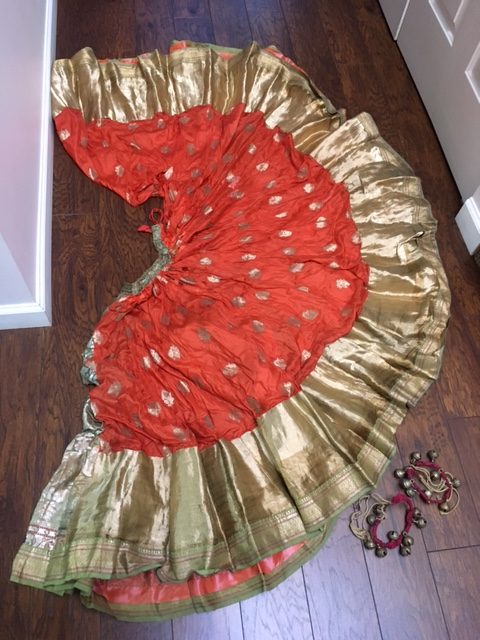 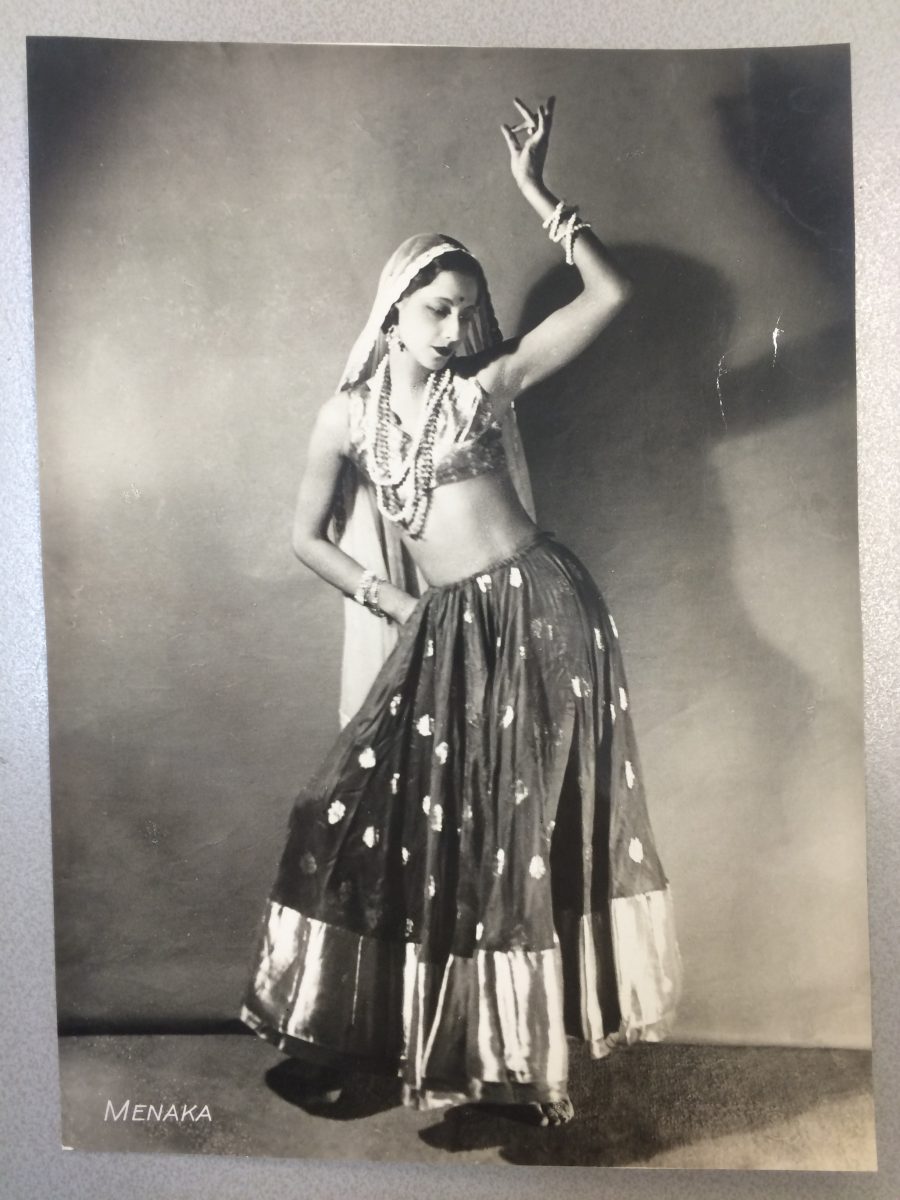 Karen had herself performed in it presenting a choreography she had learned from her teachers, and which bears witness of how Menakas choreographies might have looked like. The music was taken from a collaboration of Ravi Shankar and André Previn called East Meets West.  It blended various Indian dance styles, mostly Manipuri, but also Kathak. “But the beginning part is the beautiful part”, Karen states. “In the dance, one shows a stylized flower [Karen shows an opening bud with her hands] … and the washing yourself with water to awaken and the garden full of flowers.” These poetic images came from verses the famous Indian poet Rabindranath Tagore:

Hidden deep in the heart of things,
Thou carest for growth and life:
The seed becomes shoot, the bud a blossom,
The flower becomes fruit.
Tired I slept on my idle bed
in the illusion that the work had an end.
In the morning I awoke to find
That my garden was full of flowers.

In her book, Karen Kurnaedy inserts also imaginary quotations from her teachers to add a poetic dimension to the descriptions. Especially one in which Gertrud/Karen beautifully describe this dance piece should be reported in full length:

As the dance begins, I listen to the sound of a languid and stirring flute melody entice and draw each gesture from the dancer’s body. As she recites the poem, her hands form a seed, which transforms into a bud, then a blossom. She marvels as she creates a glorious lotus flower with fingers and palms. The dancer then sinks to the floor to convey an exhaustion that emanates from being tired of living and succumbs to sleep. In her rest, the garden rejuvenates her spirits and she awakens, refreshed. She is paused in this moment to see her garden has bloomed in full to reveal the creations of Brahma, himself.

Now, the music transitions into a much faster tempo and the dancer performs intricate, synchronized foot and hand movements. She simultaneously jumps onto both feet which prompts the bells to jingle loudly. She quickly turns, squats, and rises, and then travels across the space on toes that fly. The dance is a blur of motion, stamps, and deliberate poses and pauses. The piece ends with a continuous turning which gradually gains momentum until she is spinning in a flurry of orange silk, her skirt blooming around her as a flower in the garden.  [Our love story with dance: 404.]

Between the collaborations the Hanova sisters and Menaka’s ensemble the production “The Golden Gate” particularly stands out. The allegorical piece, comprising no less than 70 dancers, was the final presentation of the International Cultural Exhibition from January 19th through to February 2, 1945, and organized by the Goodwill Committee of the Rotary Club Bombay. [Our love story with dance: 282.]

We know from countless German theatre reviews that it was precisely these graceful hand movements that also fascinated Menaka’s audience there. Another very valuable document for the reconstruction of her artistic work after her tour of Germany is the programme booklet of an artistic collaboration with the Hanova sisters. 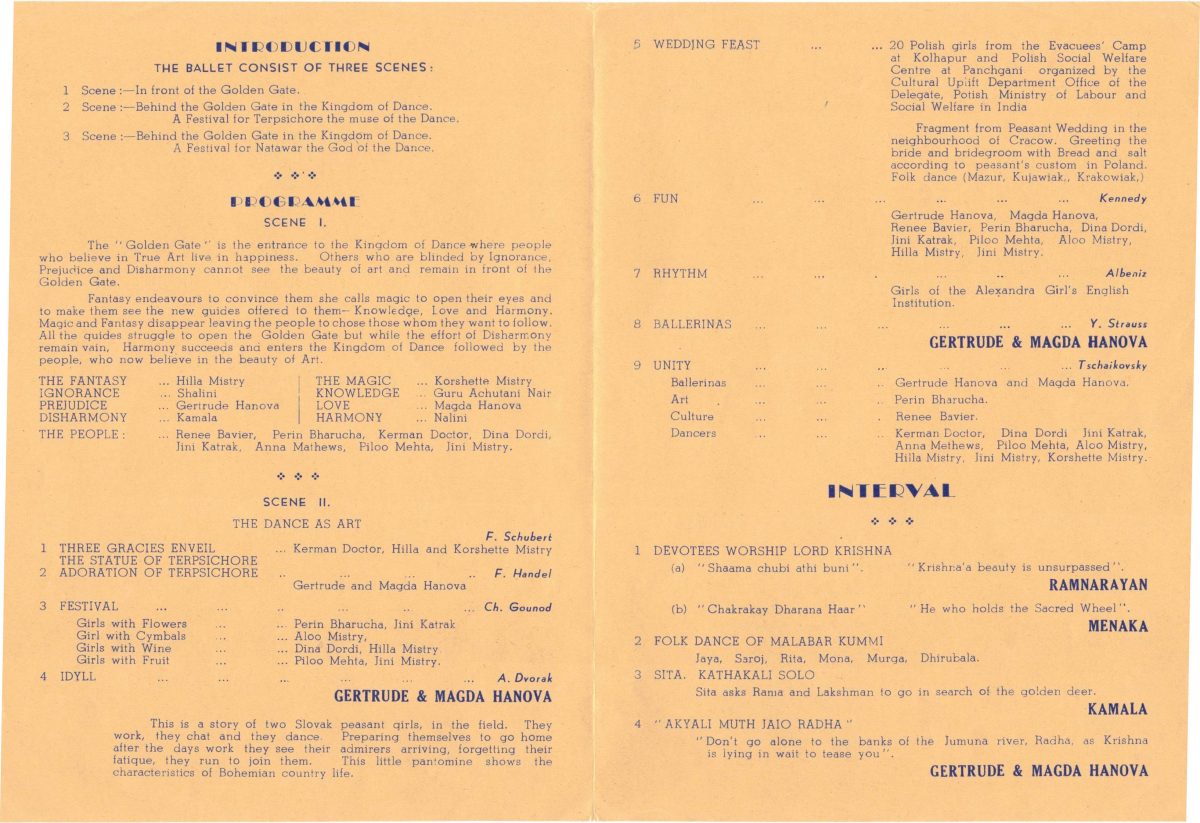 Between the collaborations of the Hanova sisters and Menaka’s ensemble the production “The Golden Gate” particularly stands out. The allegorical piece, comprising no less than 70 dancers, was the final presentation of the International Cultural Exhibition from January 19th through to February 2, 1945, and was organized by the Goodwill Committee of the Rotary Club Bombay. [Our love story with dance: 282.]

The piece develops in front of and inside the Golden Gate, the passage towards to the imaginary realm of dance where harmony reigns and humans flourish. The two parts were dedicated to a European and an Indian dance deity. The European part was dedicated to the Greek muse of dance Terpsichore, and the Indian part addressed Krishna Natavar. Both featured specially composed choreographies to worship the respective deity, but also folk dances and folklore. Gertrud and Magda Hanova had created the European part but also danced one piece in the Indian section curated by Menaka and Ramnarayan.

Menaka and Ramnarayan’s solos, on the other hand, show their efforts to expand the repertoire of classical Indian dance. They are supported by other masters from Nrityalayam, Menaka’s dance and music school in a suburb of Bombay. In this production, in which European and Indian art are placed side by side as equals, emerges a new understanding of stage art beyond national appropriations. Both dance forms are an expression of a universal, cross-cultural phenomenon and can flow harmoniously into each other.

In this spectacle, the two dance worlds complemented each other in praise of harmony amid the currently raging world war. How the gruesome reality influenced the dance production is visible in the Polish Wedding Dance, the fifth piece in the first half of the production. It featured 20 Polish girls from the Evacuee’s Camp at Kolhapur and was organized by Polish Social Welfare Centre at Panchgani.

This artistic project thus acquired a special significance against the backdrop of the catastrophe which Europe faced just a few months before Germany’s unconditional surrender. War and destruction reigned throughout the continent, and many people were displaced all over the globe. Not only Gertrud and Magda Hahn had found a temporary home in India, but also countless civilians from all over Europe and Asia. In 1939, the Indian government organised humanitarian aid for about 5000 displaced Poles and housed about 500-600 children in Valivade, near Kolhapur. About 40 girls were sent to school in Panchgani and apparently have prepared a potpourri of different Polish folk dances, which they had already performed in functions inside the Balachadi camp. 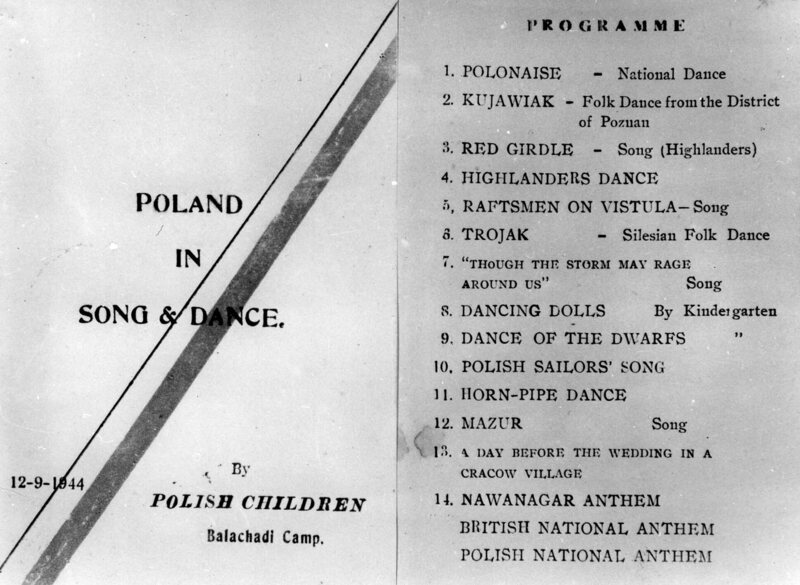 Program sheet of a function by children in Balachadi. THE SECOND HOMELAND: POLISH REFUGEES IN INDIA BY ANURADHA BHATTACHARJEE, SAGE INDIA

The Polish Wedding Dance in The Golden Gate programme is a vivid expression of the artistic and social commitment of the artists involved and their effort to translate their ideas into art.(one historical photograph can be seen here)

The “shared vision” of the Hanova sisters and Menaka came to an end far too soon with Menaka’s passing in 1947. In the same year, a new phase began for India, which meant independence from colonisation on the one hand, but also bloody conflicts in the partition of the country on the other. The Hanova sisters left India for England and later Canada. Karen underlines the deep connection and respect that Gertrud and Magda had for Menaka’s strength and determination with which she had promoted the revival of Indian dance. However, the sisters retained from these formative years not only the Indian dance techniques they had learned but also developed further a vision of dance as a tool for physical and spiritual human development and beauty as a bridge between cultures.

More information and beautiful pictures can be found in Karen McKinlay Kurnaedy’s book Our Love Affair with Dance, 2021.